Welcome to Des Moines: Here are the Candidates

If any ordinary citizen were to fly into the Des Moines International Airport, leave and head north on Fleur Drive, they would be quickly reminded of where they are in the country because of the high volume of billboards supporting 2016 presidential candidates. When heading north there are four total billboards from Clear Channel Advertising. Then when the same person was to return to the airport, they would see another two billboards on Fleur alone. 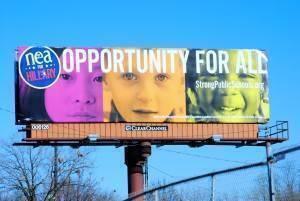 The first billboard you’ll see when leaving the airport northbound is the“NEA (National Education Association) for Hillary” billboard. It also reads “opportunity for all” with faces of children highlighted in bright colors. This billboard is the cheeriest of them all. The NEA is the largest labor union in the United States, with just under 3 million members the NEA endorsed Hillary Clinton on Oct. 3, 2015, saying “Clinton is a strong leader who will do what is best for America’s students.”

Is Iowa Carson Country? We’ll find out on Feb. 1. Photo by Skylar Borchardt

Directly behind the Clinton/NEA billboard is the first of several Ben Carson Super PAC billboards. This specific one reads“Welcome to Iowa! This is Carson Country.” The billboard was put up by the super PAC supporting Ben Carson “The 2016 Committee” and CBS reported the super PAC spends $20,000 a month on 15 billboards throughout Iowa (two of which are located on Fleur Drive within miles of the Des Moines Airport). The second is heading southbound and reads, “Dr. Ben Carson for President.” 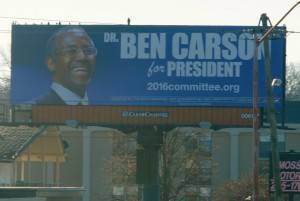 The third billboard happens to be a digital advertisement on a billboard paid for by the NextGen Climate Action Committee. The billboard features Marco Rubio, Ted Cruz, and Jeb Bush in dark lighting coupled with the words “Don’t let these candidates destroy up to 7,000 wind jobs in Iowa.” NextGen has been advocating for presidential candidates to endorse a 50 percent renewable energy goal by 2030. Tom Steyer, who has been a prolific Democratic fundraiser, who has supported Hillary Clinton in the 2016 election, funds the group.

The final billboard in view just before you’ll hit the exit for downtown Des Moines is by CSPAN and simply reads “The Road to the White House.” Fitting, as it is literally the road most candidates will travel on into any event in Des Moines. I can only imagine what Clinton or Bernie Sanders think as they pass that sign every time they arrive.

When returning to the airport, southbound on Fleur Drive, there is one other billboard of note. It reads, “Politics as usual will not heal America. Bernie will.” Although Sanders himself does not have a super PAC, one supporting him has paid for the billboard. “National Nurses United,” who endorsed Sanders, has paid for this billboard, and a few others across Iowa and have been working to garner further support for the Sanders campaign by door knocking as well.

Billboards may prove to be a way to catch the eyes of undecided voters, and some special interests and super PACs have been placing a lot of stake in them. It makes it even better when they are concentrated around the Des Moines International Airport where most candidates also have to fly in and out of when campaigning in Iowa.

Borchardt is a junior studying political science and law, politics, and society from Litchfield, Minnesota. This summer he interned in the office of U.S. Senator Al Franken (D-MN) and was the recipient of the Harkin Institute D.C. Experience Scholarship. He enjoys politics, Minnesota sports and playing his guitar. Follow him on Twitter.