Jeb Bush: Walking the Line between Humility and Intellect 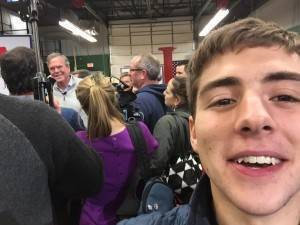 Having seen Ben Carson speak at DMACC in Ankeny a few months ago, I did not have high expectations of seeing Jeb Bush at DMACC in Newton. However, I was pleasantly surprised by Bush’s speech.

In my time blogging for this course, I have seen Carly Fiorina, Carson, Mike Huckabee, Rick Santorum, and Rand Paul all speak. My main criticism of these other candidates has been that they’ve been too caught up in rhetoric as opposed to policy. Santorum said that as president, he would use the power of the bully pulpit to stress American and family values. This, he said, is the most powerful tool a president can use.

I respectfully disagreed with Santorum. The president has the power to sign meaningful bills into law. To ensure the laws are faithfully executed. To control the armed forces. The previous Republican candidates I had seen were all powerful rhetorically but didn’t outline their specific plans as commander-in-chief. I wanted to hear specifics and plans, not be lectured by presidential candidates on their values. In this respect, Bush delivered.

Perhaps Bush has more faith in the average Iowa voter than the other candidates. He recognizes the Iowan’s capacity to understand his policies and goals. Although a Midwestern outsider, he truly does value heartland values and the Iowa people. Such a stark contrast between him and the out-of-touch Bruce Braley, who patronized farmers during his campaign.

However, I think the main reason Bush is quick to specifically outline his policies is because he has actually thought them through. Although the brashness of Donald Trump and the humility of Carson are working for them in the short run, they won’t secure the nomination on personality traits alone. In fact, FiveThirtyEight analyst Nate Silver predicted Carson and Trump both stand only a 6 percent  chance of securing the nomination. If others in the audience were as impressed as I was by his clear plan, I believe Bush’s slow-and-steady approach will secure him the nomination (or at least second to Marco Rubio who he needs to watch out for).

In addition to his specific plans, I was also impressed by his personal branding. It is no secret that Bush has had trouble differentiating himself from loudmouth candidates like Trump. Bush emphasized that one of his strongest traits as a leader is his humility. He shared a story of a young Hispanic mother who accused him of not caring about her developmentally disabled daughter. Instead of getting indignant at such an accusation, he listened and committed millions of dollars to those with disabilities, becoming good friends with the mother in the process. Unlike other candidates who stand out for being loud, Bush hopes to stand out by being quiet.

He stressed that such ability to listen takes humility, and he referenced himself as “this humble candidate” when asking attendees to caucus for him. In addition, he stressed that Washington politicians are not smarter than Iowans. Clearly, Bush was pulling no punches when it came to portraying himself as down-to-earth. Indeed, watching him speak in his rather casual attire, it was almost easy to forget he is the father and brother of two former presidents.

As much as this lifelong Democrat hates to say it, I was genuinely impressed by Bush, and I believe he will perform better in the caucuses than his poll numbers currently indicate. He was humble, a personality trait necessary to fare well with the “Iowa Nice” electorate. In addition, he spoke to the crowd as equals – unlike some other candidates – educating Iowans on his policies without being condescending. Unlike his brother before him, I could see sharing a beer with him despite our differences, and I expect other moderate Iowans feel the same.

Feldman is a political science and data analytics double major from Clarendon Hills, Illinois. He loves Bruce Springsteen and poorly attempting his songs on guitar. Follow him on Twitter.