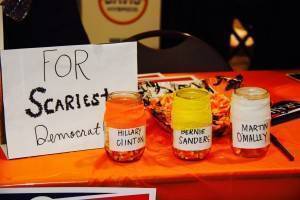 Iowa Republicans could vote for the scariest Democrat at the Growth and Opportunity Party on Oct. 31. Photo by Rebecca Christopoulos.

The Growth and Opportunity Party, a GOP-sponsored event, took place on Halloween at the Iowa State Fairgrounds. If you ever doubted a politico’s ability to get into the holiday spirit, the Republican Party of Iowa put quite the spooky twist on your average large-scale caucus event. RPI went for the scary factor this year when planning their Growth and Opportunity event, and what’s scarier to Republicans than the three democratic presidential candidates and their band of liberals? Absolutely nothing. The Iowa State Fairgrounds, usually home to the vivacious Iowa State Fair, became a hall haunted by the spiritual presence of democrats.

Local Iowa Republicans had the ability to vote for the “scariest democrat” with Hillary Clinton and Bernie Sanders polling higher than Martin O’Malley. Sound familiar? 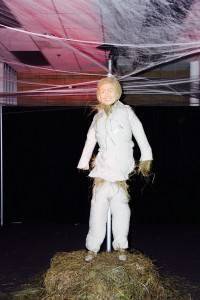 The scariest Democrat to conservative Iowans is by far frontrunner Clinton. She is so scary that she was prime subject of RPI’s haunted house. Before we unveil the atrocity that is this Democratic haunted house, I must warn you to beware of the “dead Democrats inside.”

This portrayal of Clinton to the right is not only terrifying to your average Republican; it’ll definitely scare your typical Democrat. RPI’s depiction of Hillary as a scarecrow in the haunted house may or may not look like she is about to be burned at the stake. This highly offensive portrayal not only took the Halloween theme too far, but it demonstrates an abhorrence of the likely Democratic nominee. I guess not only Sanders’ supporters are feeling the burn.

Christopoulos is majoring in politics and broadcast journalism. She was born and raised in San Francisco but had to move to Iowa for sweet corn and caucuses. Follow her on Twitter.