A car decorated in support of Hillary Clinton before Saturday’s Jefferson-Jackson Dinner. Photo by Zachary Blevins.

With all three Democratic candidates hosting rallies in downtown Des Moines before the Jefferson-Jackson Dinner, you couldn’t be anywhere downtown without being overloaded by political advertisements and endorsements for the candidates. Here are a few of the techniques each campaign utilized:

Lining multiple blocks along 5th Avenue near Hy-Vee Hall, I found approximately 32 cars parked on both sides of the street decked out in red, white and blue car paint. No two cars were the same, and the designs were certainly creative, with one having a map of the United States and another the Hillary logo and the words “Madam President” along the passenger side. I imagine the volunteers were able to orchestrate this setup when they showed up bright and early to set up for the rally with Katy Perry. 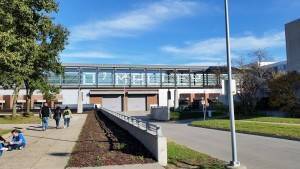 One of the greatest parts about downtown Des Moines is the system of skywalks across the city, allowing people to get around during the freezing winter months. This also gave a canvas of blank windows for campaigns to use. Both O’Malley’s and Clinton’s campaigns used individual posters to spell out their candidate’s name, creating a fun visual for drivers and pedestrians in their commute. Note to O’Malley’s campaign: Use more tape next time or else people might start supporting O’Mailey.

The space around Hy-Vee Hall was a minefield of candidate yard signs. Photo by Zachary Blevins.

Literally everywhere. As seen before, Bernie is dominating the yard sign game, filling entire hills with his signs and even, in true Hansel and Gretel fashion, creating a line of yard signs from I-235 all the way to his rally, which is just shy of a mile. There was no confusion on how to find Bernie.

Bernie’s campaign also monopolized on the pavements of downtown Des Moines, filling a three-block radius around Hy-Vee Hall with a continuous series of chalking. From standard “Feel the Bern” chalkings to more complex ones featuring Snoopy or the Statue of Liberty, it was very apparent that the Bernie team hit the ground running when they started setting up that morning. In a sea of mass-produced campaign materials, these chalkings stood out as artwork more than anything else, perhaps increasing the chance that a pedestrian would stop to look at it. While the more intricate chalkings were impressive, my absolute favorite had to be the one in the video below.

Walking around downtown Des Moines left me wondering where in the world I was because it was almost unrecognizable thanks to the plastering of campaign signs in every conceivable fashion. It was a clear battle between the candidates to get their name out there the most; however, there was simply too much going on for a clear winner to emerge.

Blevins is a junior politics and strategic political communications double major at Drake. He avidly follows Postmodern Jukebox, is a strong proponent of the color orange, and can often be found relaxing in a hammock if it’s a nice day out. Follow him on Twitter.