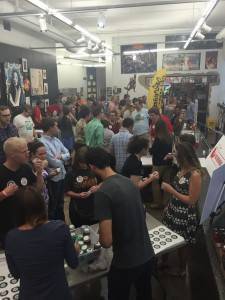 Caucusers sample beer before making a decision on who to support.

The caucusing took a little over two hours with groups of caucusers moving through the room sampling all sorts of Iowa beers. While personally caucusing for Peace Tree Brewing Co., I began talking to the woman next to me, unbeknownst to me this was Libby Crimmings, founder of the Give A Damn Des Moines, which she describes as an organization connecting amazing people to other amazing people, all with the hope of making the city better. Thursday night’s beer caucus was conducted in the style of the Democratic Party; Crimmings hoped that conducting a practice run prior to the real caucuses would help potential voters understand the system better.

The crowd in the Gallery Room of the Des Moines Social Club filled the room with conversation and cheers of victory when a brewery achieved a viable number of supporters. Aside from a small group of passionate caucusers the remainder of the crowd appeared to be more interested in the beer than learning about the caucus process. Frances Venable, a Des Moines transplant from Kansas City was at the “mockus” to learn the process. This is her first presidential election in Iowa and is excited to experience the excitement of caucusing, 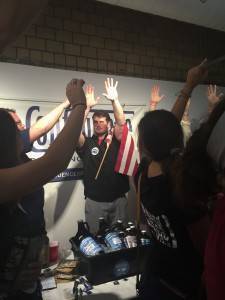 “The Best Damn Brewery Mockus,” successfully completed its mission by helping to inform eligible voters, specifically those between 18-30, of the Democratic caucus system.