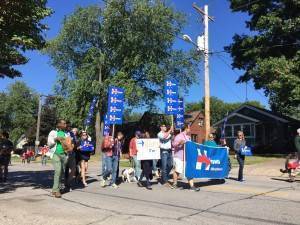 Supporters of Hillary Clinton march at the Beaverdale Fall Festival parade on Sept. 19.

Leading up to the Iowa Caucuses on Feb. 1, 2016, presidential candidates and their supporters have participated in a plethora of activities to get awareness and support for their campaigns. As a content Iowa captive, I’ve been lucky enough to see a couple of political events in unconventional locations: the Iowa State Fair, where candidates could be seen eating pork chops on a stick, and a brewing company, where Martin O’Malley drank and sang to a crowded room.  However, until Sept. 19, I had yet to see a parade with political undertones quite like that of the Beaverdale Fall Festival.

Unlike me, most paradegoers attended the festivities with family and friends, not to watch for political groups. Connie from Johnston came to the parade to spend time with her family and explore the festival, choosing to get information about candidates from newspapers or television rather than attending political events.

She’s not alone in her disinterest in candidate appearances. Candidates like Rick Santorum and Donald Trump have been struggling to get potential voters and interested caucusgoers to attend their speeches. In June, Santorum spoke with just one attendee at a restaurant in Hamlin, Iowa. Trump, for his part, does not have trouble attracting substantial crowds but encounters difficulties in getting voters who are genuinely interested in his policies to listen to his speeches, rather than those who attend solely for entertainment purposes. Trump supporters were marching in the parade to promote his speech at an Urbandale high school that night, while Santorum’s followers were absent.

The parade started off with several local politicians vying for election or re-election to city council, a school district board or, on a larger scale, congress. Most of the candidates came up to me and personally introduced themselves while shaking my hand. Bands followed cars inching along the route, playing marching melodies in heavy uniforms on a sunny, 70-degree day. Representatives of local businesses and organizations also passed by, throwing candy and passing out sheets of paper with mission statements and information about upcoming events.

Political supporters also handed out swag. Ben Carson’s team gave members of the crowd 196-page books entitled Ben Carson: Prescription for America. Hillary Clinton’s supporters passed out stickers. Bernie Sanders’ crew didn’t provide any handouts, but they did have a person dressed as a dinosaur wearing a Bernie T-shirt. O’Malley and Trump were also represented in the parade, though these groups were notably smaller than the presentations of the other three candidates. 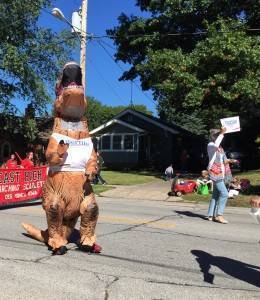 A Bernie Sanders supporter dressed as a Tyrannosaurus Rex waves at parade-goers at the Beaverdale Fall Festival on Sept. 19. Photo by Sarah Leblanc.

When the last group in a parade of over 100 entries passed by, I abandoned my blanket and headed over to the man next to me who had been greeted by almost every candidate and member of a political group that passed by, Republican and Democrat alike. Jay Byers and his daughter didn’t attend the parade for the politics, but that doesn’t mean he isn’t involved in the local political scene.

A Des Moines local, Byers is the CEO of the non-partisan Greater Des Moines Partnership. The Partnership, combined with businesses and institutions such as the Iowa Economic Development Authority, The Des Moines Register and Drake University, in partnership with the Iowa Democratic Party and the Republican Party of Iowa, helps make up the Iowa Caucus Consortium. Byers said the Consortium works to ensure that both the national media and the candidates are able to have a fulfilling and successful experience during their time in Iowa.

“We have an opportunity to get involved with the political process,” Byers said of living in Iowa. “If you’re not meeting the candidates, you’re not trying.”

He’s probably right. Most candidates have been traveling around Iowa’s 99 counties for months in an attempt to rack up name-recognition and support around the state.

An hour and a half after the parade began, I got into my car with a large bag full of candy, a hot dog that was thrown at me from a grill on top of a float, a chip clip, several brochures and flyers, and a reminder of why Iowa is the best place to be during caucus season.